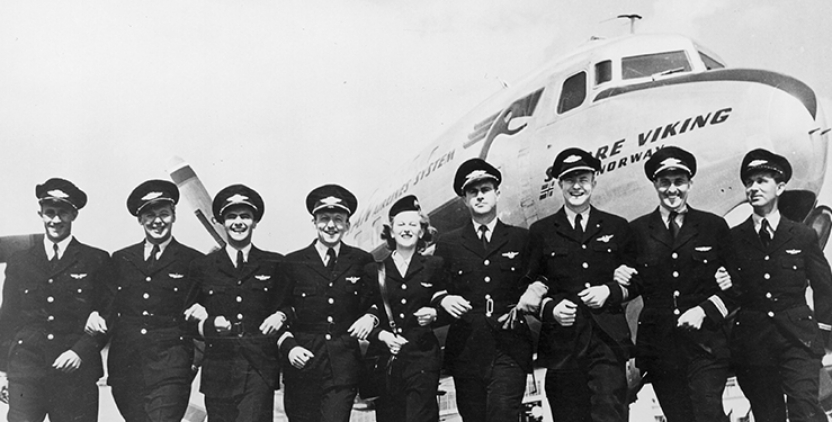 1920 DDL is listed on the Copenhagen Stock Market

1957 SAS is the first airline to offer “round the world service over the North Pole.” North Pole Shortcut Copenhagen – Anchorage – Tokyo.

1965 SAS is first to introduce and electronic reservation system.

1967 DNL is listed on the Oslo Stock Exchange.

1980 SAS opens its first hotel outside of Scandinavia, the SAS Kuwait Hotel. SILA is listed on the Stockholm Stock Exchange.

1981 SAS EuroClass is introduced on all European routes.

1982 SAS is the most punctual airline in Europe for the first time.

1994 Focus on airline operations in the SAS Group – sale of a number of subsidiaries.

1997 SAS is one of the founders of Star Alliance.

1999 The SAS Group becomes a majority owner of Widerøe.

2001 A single SAS share is established. On July 6, SAS is listed on the stock exchanges in Stockholm, Copenhagen and Oslo. Braathens is acquired by the SAS Group in December.

2009 To facilitate the implementation of Core SAS a rights issue of appr SEK 6 billion was carried out.

2010 To further strengthen the financial preparedness and complete Core SAS a rights issue of approximately SEK 5 billion was carried out.

2016 SAS took delivery of its fourth Airbus A330E and thereby completed the expansion of its long-haul fleet to 16 aircraft.

SAS established SAS Ireland with a base in London.

The Norwegian government divested its 9.9% shareholding in SAS.

SAS Ireland opened a base in Malaga.

SAS and Preem signed a letter of intent to secure future production of biofuel. SAS’ ambition is to only use bio jet-fuel on domestic routes by 2030.