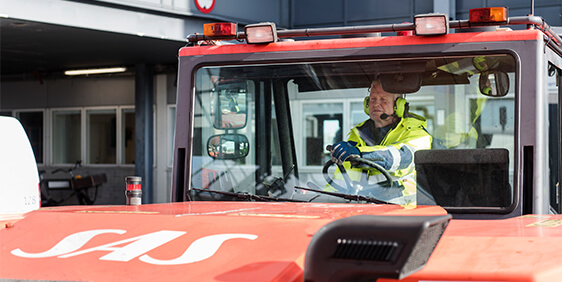 Work Environment at the airport

Particulate matter (PM), or simply particles, are solid matter in air. Further classification of particles can be made by size into coarse, fine, ultrafine and nanoparticles.

Since interest was pointed at ultrafine particles in an air quality investigation at Kastrup-Copenhagen Airport in 2010, SAS has been deeply engaged in this issue. The investigation report stated that the majority of the studied compounds, including most particles, are below the limits.

The exception is the ultrafine particles for which pollution is at a high level. Sources are identified as engines that use different types of fuel such as the engines and auxiliary power unit on aircraft or diesel engines on all kinds of vehicles at the airport. It is not known how ultra-fine particles impact health in the absence of scientific studies or investigations, which means that there are no established national or international limits.

However, it is known that exposure to larger particles can mean increased risk of serious diseases. Therefore, it is important to find ways to reduce the number of particles in daily operations at all airports.

In short, the work is about using more electrical vehicles and electrically powered equipment, introducing remote engine start-up of aircraft, increasing the amount of one-engine taxiing and higher awareness among employees. SAS is focusing on these types of activities at all airports.