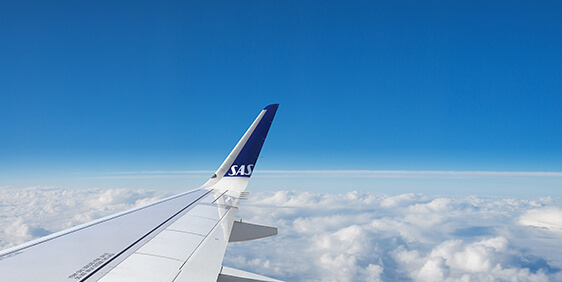 Renewable energy in the wings

To realize the airline industry’s environmental objectives, the future of aviation is largely dependent on the development of alternative and sustainable jet fuels based on one or more renewable sources.

Unlike most types of transportation, aviation has no real alternative to the liquid fuels that are currently used. There is also a need to secure access to liquid fuels as the supply of fossil alternatives is expected to decline and/or become more expensive.

Developing alternatives that can reduce climate-impacting emissions while also fulfilling the established sustainability criteria is of the utmost importance.

The principal sustainability criteria are that production shall be sustainable in the long-term and thus not compete with the production of foodstuffs or access to potable water, do not harm biodiversity and use as small an area of land as possible. According to the IATA, phasing in alternative fuels over time could enable a reduction in the air travel industry’s emissions by up to 80% throughout its lifecycle.

As of today, it is possible to use alternative jet fuels that are based on such renewable sources such as camelina, jathropha, algae, animal oils, fats and various types of coal-based sources such as waste from industry, households, agriculture, forestry, paper mills and so forth. These two specifications allow up to a 50% blend with the traditional fossil fuels to ensure the high requirements related to engines, as well as fuel supply systems on aircraft and on the ground.

Initiatives are under way in a number of countries worldwide to evaluate the possibility of producing alternative sustainable jet fuels based on renewable sources. These initiatives often take the shape of partnership projects between private and public players. Unfortunately, we have not yet experienced the same commitment in Scandinavia.

As a result of the approved certifications, the technological prerequisites are in place and buyers are available, including SAS. It is now a matter of initiating large-scale production at competitive prices.

There are currently a limited number of suppliers that can deliver minor quantities of a certified alternative jet fuel at a high price. These suppliers have provided a number of airlines with sufficient fuel to perform flight trial demonstrations. However, SAS has opted not to purchase these fuels because of very high prices. Furthermore, SAS’ sustainability requirements must be fulfilled.

The Group comprises a number of major global airlines and represents about 32% of the global civil jet fuel consumption. SAFUG is carefully monitoring the activities that are currently under way with the aim of ensuring long-term sustainability in all phases of the development of alternative fuels. It is vital that the production of alternative jet fuels is sustainable in all aspects.

SAS is also involved in a number of national and international forums, such as the IATA/ATAG biofuel network, the Sustainable Biofuel Network in Copenhagen, Cleantech Cluster, Global Green Growth Fora (3GF), and various Scandinavian interest organizations working in the area.

SAS also supports the EU’s Biofuel Flight Path, which aims to create the preconditions to produce two million tonnes of biofuels by 2020.

SAS continued to be a driving force in the work in NISA, which brings together aviation players in the Nordic region in the effort to accelerate commercialization of alternative jet fuel production in the region.

SAS and Avinor has been working on different activities in order to accelerate commercialization and production of alternative sustainable jet fuel in Norway.

SAS, Swedavia and RISE has plans to launch a knowledge-sharing digital plattform in order to accelerate commercialization and production of alternative sustainable jet fuel in Sweden.

During 2016, 2017 and 2018 SAS has used approximately 100 ton alternative jet fuel on flights from Oslo, Bergen, Stockholm, Kalmar and recently also from San Fransisco. SAS aims to increase this amount the coming years.